Fadhil Yunus
Adi Said marked his competitive debut for Kota Ranger FC in style after his hat-trick guided his new employers to an impressive 3-1 win over MS ABDB in the curtain raiser Charity Cup 2020 at the Hassanal Bolkiah National Stadium last night.
The star man netted twice in the first half before sealing his hat-trick in the second half with MS ABDB managing a consolation in the closing stages of the cup affair.
Having spent several seasons in Singapore and a brief stint in Malaysia, Adi Said had a chance to announce his arrival to Brunei football through his signature free kick which he curled just over the bar.
MS ABDB nearly took the lead from open play when a player’s cross-cum-shot grazed against the bar.
Adi, who was named captain, tested veteran MS ABDB goalkeeper Mohammad Tarmizi bin Haji Mat Johari with a fierce drive with the latter pushing the ball away for a corner.
The former DPMM FC forward scored his first goal for Kota Ranger after he tapped in a teammate cross from close range in the 39th minute.
A minute before the break, Kota Ranger played a long ball forward which was met by Adi who darted towards goal all alone before coolly steering the ball home past his former DPMM FC teammate.
Brunei Super League reigning holders MS ABDB gradually grew into the game as Mohd Hariz Danial bin Haji Khallidden took the responsibility of leading the line but the Kota Ranger defence succeeded to contain his threat. 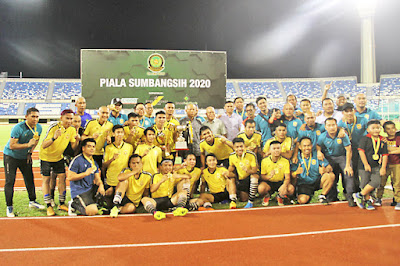 Kota Ranger FC substitute Awangku Muhammad Hazmi bin Pengiran Salleh nearly made an instant impact with an assist after he delivered an appetising cross into the middle of the box which his outstretched teammate missing necessary contact.
Mohd Hariz Danial got the MS ABDB fans excited after his shot whistled wide as he looked to help claw his side back into the tie.
However, any hopes of a comeback faded after Adi skipped his marker before firing home a fine effort to complete his hat-trick.
The army personnel pulled a late consolation after team captain Mohammad Khairul Mee bin Mail drove a low shot after reacting to a loose ball in the box.
Kota Ranger has also appointed Darus bin Tanjung as head coach who won his first silverware with his new club.
“Tonight marked the starting point with me and Kota Ranger FC for the 2020 season. My boys worked hard and they deserved to win tonight. The formula is teamwork, hard work and keep playing football,” he said.
The head coach also hailed the contributions of the club’s latest star Adi Said after he bagged a hat-trick in his first start for the club.
“Adi Said is a well-known player in Brunei Darussalam. Alhamdulillah, he scored three beautiful goals tonight.”
Meanwhile, Darus’ opposite number and MS ABDB head coach Rosmin Kamis highlighted his charges worked hard to try and recover adding that their opponents deserved to be crowned champions after converting their chances.
“Our team tried to come back in the second half. We gave everything and I pushed our boys to go for it and that there is nothing to lose. Now, we look forward to the new 2020 season,” he said.
“We need more than two goals to win in the second half. Maybe if we didn’t concede the third, the game might end up differently,” said Rosmin who congratulated the Kota Ranger team on their success.
Minister of Defence II Pehin Datu Lailaraja Major General (Rtd) Dato Paduka Seri Haji Awang Halbi bin Haji Mohd Yussof presented the prizes.
at 6:20:00 AM No comments: Links to this post 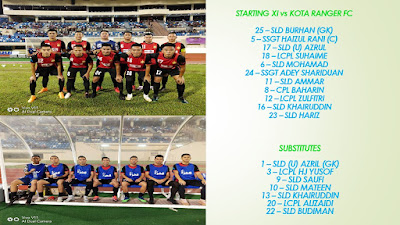 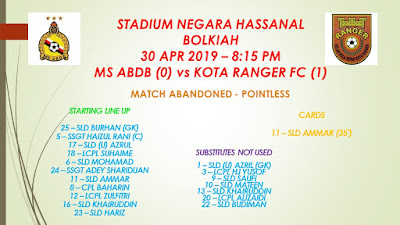 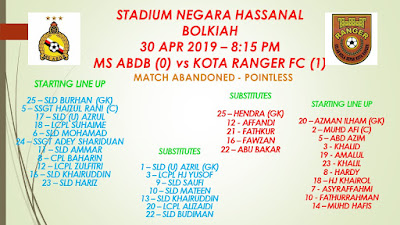 |     Fadhil Yunus     |
MS ABDB were formally announced as the champions of the DST Super League for a historic fourth time despite the match coming to a premature end with Kota Ranger FC leading 1-0 at the Hassanal Bolkiah National Stadium last night.
The two teams were not able to complete their final league match of the season amid the heavy downpour as the match was only contested in the opening half.
The army personnel have long cemented the league championship as they waited for the official trophy presentation ceremony since early March.
But Kota Ranger FC, fresh from a DST FA Cup triumph, came into the tie as the first team that ended the duopoly rule between Indera SC and MS ABDB in winning major trophies.
As Kota Ranger ventured forward, Hardy Anak Bujang set up Muhd Asyraffahmi bin Norsam who decently struck a low effort in which MS ABDB shot-stopper Md Burhanuddin bin Haji Edy Asmady smothered the ball away. 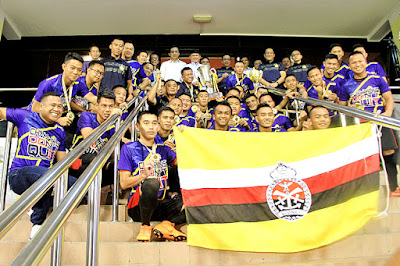 Muhd Hafis bin Haji Mahari was a constant threat for Kota Ranger with his mazy dribbling and his improvised back-heel to Hardy resulted in the ball sailing just wide off the mark.
The champions’ got the ball into the back of the net through a header but their joy was short-lived after the goal was ruled out for offside.
As if the attacking endeavours of Muhd Asyraffahmi were not enough, Muhd Fathurrahman bin Embran gave the army’s back-line a multitude of problems and he came close in breaking the deadlock.
Despite being closed down, he managed to get his shot which flew just wide much to the relief of the goalkeeper.
MS ABDB could not live with the pace of Muhd Asyraffahmi who was fouled in the box, leaving the referee no hesitation but to point to the spot for a penalty.
The pacey forward sent the goalkeeper the wrong way to establish a 1-0 lead with about five minutes of the first half to play.
But then, heavy rain lashed the pitch just before the end of normal time and it was perhaps wise to have the length of injury time shortened due to inclement weather.
The match was not continued as the league’s top three teams prepared to collect their medals.
Wijaya secured third place for the second time in three years, losing out second place on goal difference. Kasuka FC, who challenged the eventual winners for the league crown, sealed the runners-up spot.
at 6:17:00 AM 2 comments: Links to this post 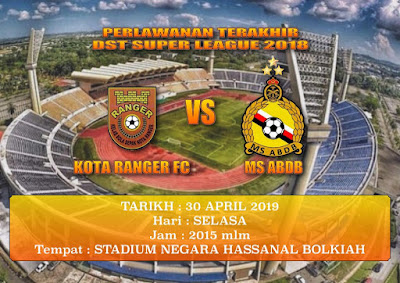 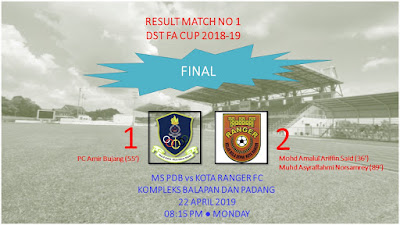 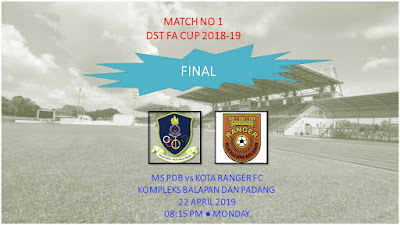 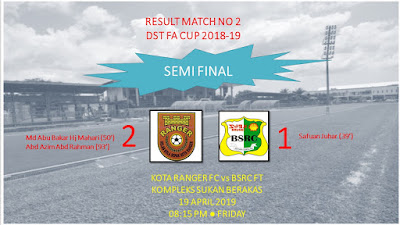