Despite aiming for top honours, MS PDB will not be seeing the field until a week after Hari Raya celebrations.

"There will be no training during the fasting month as all the players are back at work and we'll only start training after a week of Hari Raya," Sahrin told The Brunei Times.

"From watching the 2014 Brazil World Cup, we have to learned about some tactics (so) we'll execute them during training," added Sahrin.

MS PDB's last showing at the FA Cup saw them get knocked out through penalties by Indera Sports Club (SC) in the semi-finals.

The match up saw the two draw 1-1 before Indera SC went on to win 5-3 via penalty shootout.

The FA Cup is open to all registered team in all four districts.

Clubs who are intending to join the biggest football tournament in the Sultanate have until 3pm tomorrow to hand in their completed entry forms along with the $150 entry fee.

Entry forms can be obtained from the NFABD House, which is located along Jalan Pusat Persidangan opposite the International Convention Centre in Berakas.

Organised by the National Football Association of Brunei Darussalam (NFABD), the second tournament of its kind is scheduled to kick off in September.

The inaugural edition held in 2012 saw a total of 44 teams sign up for the clash.

It saw the MS ABDB knock out Indera SC 1-0 to walk away with the challenge trophy, gold medals and a cash prize of $4,000.

Indera SC's runners-up position sealed them a trophy, medals and $3,000 in prize money. 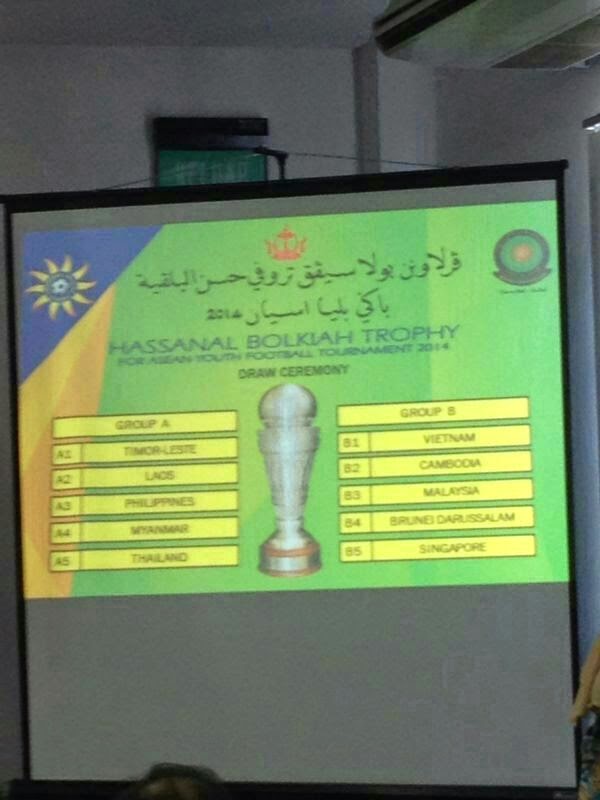 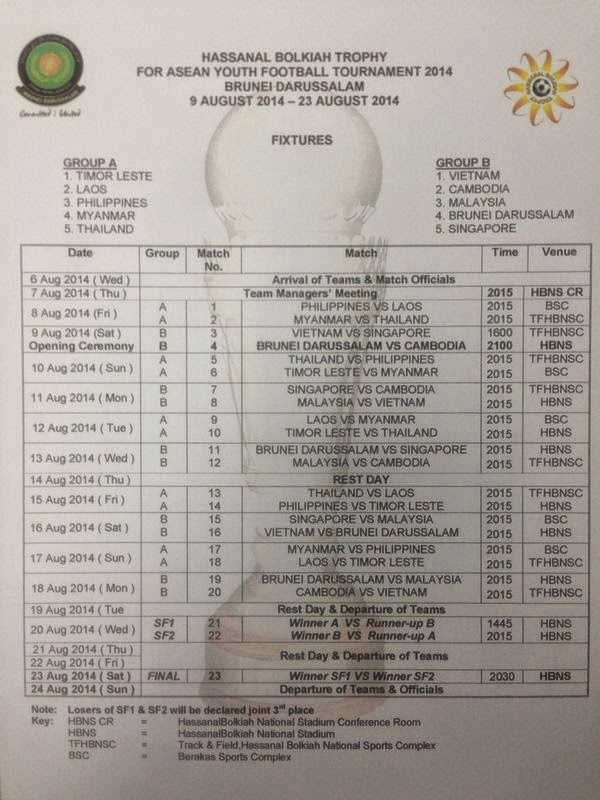 The armymen are looking forward to repeating the glory of winning the first edition of the tournament when they defeated Indera Sports Club (SC) 1-0 in the final two years ago, but first, they will need a massive revamp in the squad.

“We need to build a better squad for the DST FA Cup this year and we also must bring in young players to replace the old ones if we are to defend our title,” MS ABDB manager Major (A) Pg Mohd Mufid Pg Umar Ariffin told The Brunei Times yesterday.

“We also need to come up with new tactics and style of play for the tournament as other clubs keep on improving from year to year,” he added.

Currently second in the nine-team DST Super League with 31 points - six behind defending champions Indera SC - MS ABDB know it is almost impossible to catch up with the leaders, who only need to win one of their three remaining matches to defend their DST Super League title.

“The chances are too slim for us to compete with Indera for the league title this year, but we must continue to fight until the very end,” continued the manager.

“We are currently having our break for the fasting month of Ramadhan and there is no training at the moment, but we will start training after Hari Raya to get ready for our remaining league matches and the DST FA Cup,” he added.

Organised by the National Football Association of Brunei Darussalam (NFABD), the second edition of the tournament is slated to take place in September.

Teams have to submit their completed entry forms as well as an entry fee of $150 before 3pm this Friday.

Entry forms can be obtained at NFABD House, which is located along Jalan Pusat Persidangan opposite the International Convention Centre in Berakas.

The tournament is open to all registered football clubs in all four districts.

Kilanas FC finished at the bottom of the nine-team league with only seven points after recording two wins and one draw from 16 matches.

Currently sitting at the top of the national elite league table are defending champions Indera Sports Club (SC) with 37 points and three games in hands.

“We have played all our DST Super League matches, so now we can focus on the DST FA Cup,” said
Kilanas FC assistant manager Emzah Hj Chuchu during an interview with The Brunei Times yesterday.

“We finished bottom in the league and I hope that we can do better in the DST FA Cup… We managed to reach the third round in the tournament two years ago, I hope we can improve on that.”

They defeated Besa FC 5-1 in the second round but lost to Royal Brunei Police Forces Sports Council (MS PDB) 2-0 in the third round.

“For now there is no training as we are taking a break for Ramadhan and training will resume after Hari Raya,” said Emzah.

“We are most likely to retain most of the players from the DST Super League but we might also add a number of new players for the tournament,” he added.

44 football clubs from all levels competed in the first edition of the tournament which was won by MS ABDB who defeated Indera SC 1-0 in the final.

Organised by the National Football Association of Brunei Darussalam (NFABD), the DST FA Cup will feature all the DST Super League teams.

The tournament is also open to all registered football clubs in all four districts in the country.

Entry form can be obtained at the NFABD House, along Jalan Pusat Persidangan, opposite the International Convention Centre in Berakas.

Completed form and entry fee of $150 per team must be submitted before July 11 at 3pm.

The FC Phosphor squad pose for a photo during the 2012 edition of the DST National Football League.Courtesy of FC Phosphor
Ak Fauzi Pg Salleh
BANDAR SERI BEGAWAN
SMALLER football clubs in the Sultanate will be able to pit themselves against the powerhouses of Brunei football with the return of the DST FA Cup.

The second edition of the competition will return in November, giving the smaller and less established clubs the opportunity to prove themselves on a bigger stage.

One such team is FC Phosphor.

The club, founded in 2000, had its last taste of national competition in the inaugural FA Cup competition two years ago.

“It is good to be back after the long break,” said FC Phosphor manager Tengku Syed Hardiman Tengku Syed Abd Rahman in an interview with The Brunei Times yesterday.

“We were out of the tournament (DST FA Cup) in the first round in 2012 and we are hoping to improve on that this year,” he said.

“We have started training last month for this tournament and training continues this month with the players going to the gym in the evening to keep their physical and fitness in good condition,” continued Tengku Syed Hardiman.

“Players come and go… we have added a number of new players in the team. Some of them were from the other local clubs in the country and I believe in the strength of these players,” he said.

FC Phosphor competed in the DST National Football League in 2012 but finished eighth out of nine teams, relegating them to the District Football League.

44 clubs from all levels competed in the first edition of the DST FA Cup.

The tournament is open to all registered football clubs in all four districts in the country.

Entry forms can be obtained at the NFABD House, along Jalan Pusat Persidangan, opposite the International Convention Centre in Berakas.

Completed form and entry fee of $150 per team must be submitted before July 11 at 3pm.

Lun Bawang to lace up for DST FA Cup

Organised by the National Football Association of Brunei Darussalam (NFABD), the second edition of the tournament is slated to take place in September.

Lun Bawang‘s coach Fadlin Galawat told The Brunei Times that the players’ selection for the tournament will be made after the month of Ramadhan.

“We will take a break for now, but we will start training for the tournament after the month of Ramadhan,” he said.

“We are also going to prepare for the DST Super League next season, so we need to have a proper training for both tournaments,” he added.

The Temburong District based club will be promoted to the DST Super League next season, having won the DST Premier League and will be joined by second-placed IKLS who finished the league with 16 points.

The champions ended their DST Premier League campaign with a 100 per cent win record, beating Tunas FC 3-2 in their final match at the Hassanal Bolkiah National Stadium in Berakas on May 17.

They kicked off their campaign with a 3-1 win over IKLS.

Lun Bawang continued their great form with a 3-1 win over Setia Perdana before cruising past Kota Rangers 3-0.

They followed that up with a 4-3 win over Rimba Star.

Midfielders Delson Jumat and Muhd Nursyazwan Halidi were equally impressive with the latter bagging the best player of the tournament award.

“We only managed to reach the second round of the tournament (DST FA Cup) two years ago, but this year we will try our best to improve,” said Delson.

MS ABDB were crowned the champions in the first edition of the tournament in 2012, beating Indera 1-0 in the final.