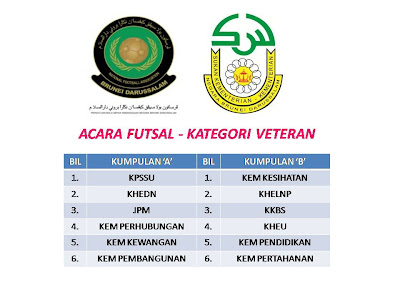 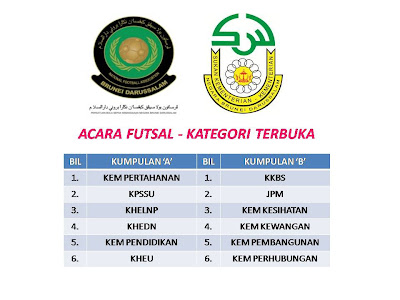 Hj Isa Herwandeo bagged a brace in the win with goals in the 17th and 30th minutes, with Hj Amirabas' strike just before half-time giving Wasabi a comfortable 3-0 lead heading into the break at the Awang Semaun Secondary School in Lumapas.

Juraimi Zulkifli scored Perkasa's only goal in the 57th minute in the game held at the Raja Isteri Pengiran Anak Saleha (RIPAS) Secondary School in Tutong.

Shaari Hj Hassim gave MIISA an eighth minute lead before Sufri Hj Matiasin's own goal gifted MIISA a 2-0 lead in the 20th minute of their Group B match.

Liang Lumut Recreation Club Football Team coach Hj Affandi Hj Julaihi cut one back for the Belait-based side in the 42nd minute only for Kassim Jaafar to restore MIISA's two-goal cushion a minute later - before Jamat Hj Hitam made it 4-1 in the 45th minute.

Jamat grabbed his second in the 77th minute, but late goals from Hj Affandi (85th) and Haziq Hidayatullah (90th) made for a nervy end to the game at the Sg Asam Sports Complex.

Playing at the Mumong Sports Complex, Mangellela got in front after a fourth minute goal from Jaiman Kapal in their Group E tie.

Pg Abd Malik Pg Badarudin equalised from the penalty spot in the 19th minute but a barrage of three goals would ensure Mangellela a 4-1 lead to take into the second half.

Khaliq Abdullah made it 2-1 in the 24th minute, Adharuddin Md Nasiruddin set the score at 3-1 in the 34th minute and Jaiman hit his second five minutes later with MBS' Noor Ahmadi Mohd Ali scoring the game's last goal a minute after the breather.

RIMBA STAR FC fought back from three goals down to salvage a 4-4 draw against Pondok 12 in Group C of the DST National Veteran Football President Cup yesterday.

Md Iswandy Hj Hamdani gave Pondok 12 the best of starts with a goal in the opening minute at the RIPAS Secondary School field in Tutong.

He doubled his team's lead in the 29th minute and completed his hat-trick in the 50th minute.

Sajulai Ahmad pulled one back for Rimba Star three minutes later and added another on the hour-mark to make it at 3-2.

Hj Zulkifli Hj Serudin gave Pondok 12 a two-goal cushion in the 73rd minute but Mohd Ali Hj Hadi struck twice in the span of nine minutes 80th and 89th to save a point for Rimba Star.

Over in Group C action, Old Stars FC and Persatuan Sang Jati Dusun (PSJD) shared the spoils after the game ended 1-1 at the Awang Semaun Secondary School field in Lumapas.

After a goalless first half, Frank Ford put Old Stars in front in the 66th minute before Ukoi Anam converted a penalty in the 83rd minute for PSJD.

XN FT outclassed IKLS Veteran FC 7-1 in their Group D matchup at the Kg Sg Asam Sports Complex, where Suni Mat Jerah notched a hat-trick after finding the back of the net in the sixth, 34th and 74th minutes.

Mohd Safri scored the only goal for IKLS Veteran in the 22nd minute.