on: October 01, 2016In: Headline, Sports
|     Fadhil Yunus     |
MS ABDB was crowned champions of the Brunei DST Super League 2016 for the second consecutive season during a closing and prize presentation ceremony at the Berakas Sports Complex last night.
The army personnel have already beaten Wijaya FC when they met their title rivals Indera SC and their 5-0 drubbing put them on a smooth course for a title defence.
MS ABDB team manager Major (A) Razanol Hardi Abd Razak was humbled by the experience of retaining the league title and modestly said that there were teams as good as them in the league.
“It was a humbling experience because the higher you go, the more you need to be grounded. I have to remind myself that although it is an honour and a privilege, we cannot forget ourselves that the other teams are just as good as us,” he said told the Weekend Bulletin after the closing and prize presentation ceremony.
Major (A) Razanol took charge of first team affairs in his first full season since continuing the work of former team manager Major (A) Pengiran Mohd Farisan Pengiran Haji Metassan halfway through last season.
The head coach added he had more freedom of choosing the players and even brought in two new additions to the squad with the senior players serving as mentors.
“This season, I had the honour of getting more responsibility in getting more hands-on with the management of the team. As most managers would know, it is quite challenging,” he further added. 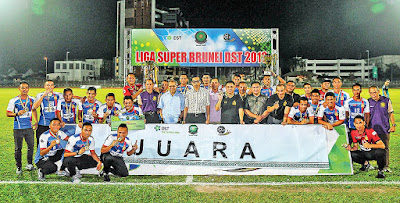 MS ABDB players and officials pose with their prize. – KHAIRIL HASSAN
The second Super League title is Major (A) Razanol’s fourth major honour since taking over the reins as team manager and he highlighted that proper management and possessing discipline as key to ensuring success.
“It just proves that with proper management and the right team, attitude and discipline, one can achieve a lot. It is not just the contribution and dedication from the management but also from the team. They did very well and they were determined and professional,” the team manager concluded.
Meanwhile, Indera SC defeated Najip FC 3-0 to pip Wijaya FC into second place in the final day of the season through Hamizan Aziz Sulaiman and a brace from Asri Haji Aspar.
MS ABDB’s Abdul Azizi Ali Rahman scooped the top scorer award with 8 goals while team-mate Mohd Tarmizi Haji Mat Johari won the 2016 Brunei DST Super League Best Player award.
Indera SC clinched the first runners-up position with Wijaya FC finishing third while Tabuan Under-21 won the Fair Play award.
The guest of honour at the event was Abdul Latiff bin Pehin Orang Kaya Seri Setia Dato Paduka Haji Mohd Yussof, member of the Board of Directors of DST, who presented the prizes to the winners.
at 11:24:00 PM No comments: 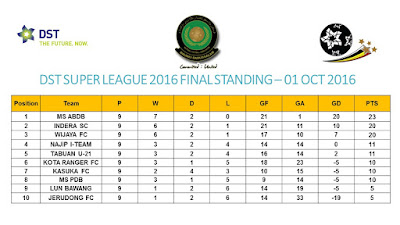 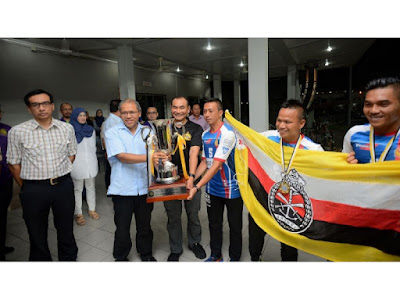 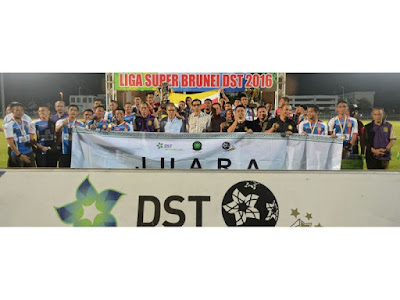 THE Royal Brunei Armed Sports Council (MS ABDB) were crowned champions of the DST Super League at the Berakas Sports Complex last night.
MS ABDB now equal Indera Sports Club as the most successful team in the history of the DST Super League with two championship titles each.
The army men clinched their first DST Super League title last year while Indera won the title in the 2012/2013 and 2014 season.
The armymen claimed the title on September 4 when their closest challengers Indera were held to a 2-2 draw by Tabuan Under 21, a result that enabled them to create an unassailable lead at the top of the 10-team league table with 23 points.
The league came to close last night with Indera securing second to finish with 20 points after beating Najip I-Team 3-0, who finished fourth with 11 points.
Wijaya FC end the season third with 20 points behind Indera on goal difference while Tabuan Under 21 are fifth with 11 points to their name.
“We feel very honoured to win the title this year and we have waited until today to celebrate," said MS ABDB’s manager Major (A) Razanol Hardi Abdul Razak in an interview with The Brunei Times last night.
“I have to say that the wait makes the achievement feel more special.
“The key to our victory has always been football discipline, especially discipline during training and during matches.
“This victory is for the players, coaches and the management. They deserved it, and if it wasn’t for their dedication and professionalism, this victory would not be possible.
“This season has been great. We have players who got injured but that is normal. For me, the most important thing is to find new talent for the next season to replace retiring players.
“Our future plan will include hunting for new hidden young talent from the (Royal Brunei Armed Forces) RBAF so that we can give them the opportunity to contribute to our organisation and, indirectly, to football in our country,” he added.
MS ABDB finished the league unbeaten with seven wins and two draws, a result which the manager described as humbling.
“It hasn’t been an easy season,” he said.
“This year’s league had its own unique challenges, and it was tough. There were some unforeseen outside influences that affected our training and management this year, but overall we all feel humbled to finish unbeaten this season.
“The best players for us this season would be Abdul Azizi Ali Rahman, our top scorer, and our goalie Mohammad Tarmizi Hj Mat Johari. Both have been impressive at both ends for the club this season,” he added.
Abdul Azizi and Mohammad Tarmizi won the top scorer and best player of the tournament awards for MS ABDB.
Present as the guest of honour to award the prizes to the winners last night was DST Board of Directors member Abdul Latif Pehin Orang Kaya Seri Setia Dato Paduka Hj Md Yusuf.
Champions MS ABDB walked away with a cash prize of $14,000, the championship trophy and medals. Second-placed Indera won $10,000, a trophy and medals while third-placed Wijaya brought home $6,000 and medals.
The Brunei Times
at 2:27:00 AM No comments: