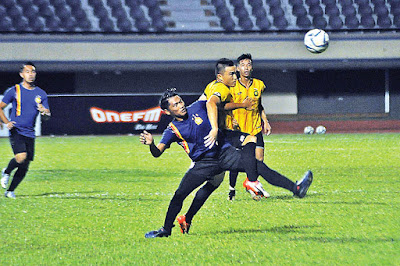 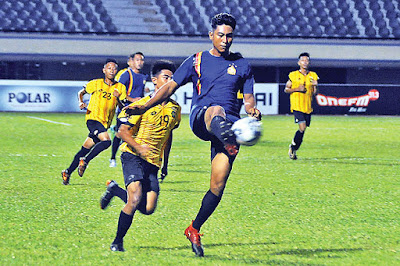 |     Fadhil Yunus     |
INDERA SC made history by winning the DST FA Cup for the first time after strikes from Md Zulkhairy Razali and Md Asri Haji Aspar in either side of half time inspired them to a 2-0 win over MS PDB in the final at the Berakas Sports Complex last night.
The club, who added their FA Cup triumph to their two DST Super League titles, become only the second side to win the DST FA Cup and the fifth team in FA Cup history.
The stage was set for both teams trying to create history with neither side having won the competition before but the police personnel received a big blow after a 37th minute strike from Zulkhairy helped soothe nerves for Indera.
Matters could have been worse at the stroke of half-time after Md Asri dinked the ball over the goalkeeper in no man’s land but the ball ended wide and MS ABDB went into the break still with a fighting chance.
Indera SC nearly doubled the lead as Md Zulkhairy teed up Md Asri but the former scuffed his effort and the MS PDB defence rushed back to clear the ball to safety.
However, the setup for the second goal was executed to perfection after beating the offside trap as Md Asri took a touch away from the goalkeeper before slotting the ball into the empty net.
MS PDB attempted to claw their way their back into the tie but a shot from a tight angle was dealt with by the Indera’s goalkeeper.

Indera SC head coach Md Darus Tanjung also won his first major silverware in his first season in charge of the team.
“This is the first time that we have finally tasted success in the DST FA Cup this year,” said Indera SC head coach Mohamad Darus bin Tanjong.
“I am very thankful to the management and I would like to say well done to all of them. The players showed a high level of commitment tonight and I hope that this will continue in the future especially in the new season.
“To preserve a 2-0 lead with the win ensures the FA Cup in our hands,” he said.
Asked whether the team was at their vintage best during the final, Darus pointed out the differences between cup and league football.
“The team showed 100 per cent commitment and their level of fitness is also 100 per cent. If we compare the League and FA, certainly there are differences. The strategy used in both is different because sometimes it invites pressure.
“We forget about it and we have to focus on football for 90 minutes,” he added.
The head coach was also asked if boasting the experience of reaching the final twice meant an advantage to his side and he accepted.
“The experience of reaching the final twice became our benchmark to instil the spirits to the players, and by keeping their experience in both finals, that is where we can find the strong spirit of 18 players listed all of whom demonstrates an excellent performance,” he said.
Guest of honour Dato Paduka Haji Mohammad Irwan bin Haji Hambali, Acting Commissioner of Police presented the prizes.
at 5:58:00 PM No comments: 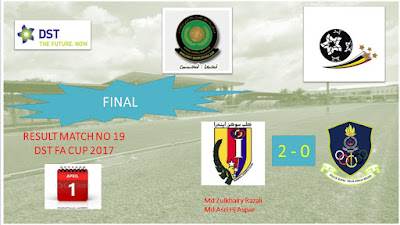 |     Fadhil Yunus     |
INDERA SC manager Rosdin Abdul Aziz has recognised the fact that history will be made one way or the other in the DST FA Cup final as either his charges or the galvanised MS PDB side will be lifting their first-ever title at the Berakas Sports Complex tonight.
MS PDB’s stunning win over MS ABDB in the last four meant that it is the first time that the latter have surrendered the DST FA Cup never mind contesting a final.
“This is a historic moment for both teams to make history and to be crowned FA Cup champions for the first time,” said Rosdin in an interview with the media.
Indera SC boasted experience at this stage after losing out to MS ABDB on both occasions in 2012 and 2015 and Rosdin highlighted the latter’s shock exit in the semi-finals.
“It is true that Indera has always met MS ABDB in the semi-final and final and this is indeed a surprise that MS PDB successfully defeated MS ABDB in the semi-final,” he said.


Despite managing a 6-0 rout against their cup final opponents last August in the league, Rosdin will no doubt be wary of the threat that the police personnel pose.
“This (win over MS ABDB) shows that MS PDB cannot be taken lightly what more with their line-up of young players.”
But, Rosdin is eying the top prize that has eluded his side since establishing themselves as a major force in the country’s top flight DST Super League.
“Nevertheless, Indera SC wants to win the FA Cup for the first time which we have not been able to after two attempts. Hopefully, this year is our year,” said Rosdin adding his hopes of a third time the charm for his charges.
The two-time DST Super League winners have been training actively and also tactically to enhance their preparations for the Sunday final.
He also provided advice to his charges who will be hoping to become a new champion in the FA Cup since AH United in the 2005/06 season.
“To all ISC players… Continue your fight till the end and bring home the FA Cup for the first time for our loyal supporters who have been waiting on lifting the FA Cup,” he said.
at 11:43:00 PM No comments: