Fadhil Yunus
Kasuka FC new recruit Asri Aspar came back to haunt his former side after netting a brace in the 4-2 win over Indera SC in what appeared to be the first major fixture of the season in the Brunei Super League at the Berakas Sports Complex last night.
Two of the so-called elite clubs have made serious reinforcements but it was the former Indera SC man that stole the headlines after putting his new employers in the lead twice.
As the designated home team, Kasuka striker Hanif Aiman Adanan saw his low shot well saved by the Indera goalkeeper Ahsanuddin Haji Dani.
Indera’s new boy Samson Kella Emmanuel showed good hold-up play in the box before setting up Amin waiting on the edge of the box, whose shot rolled harmlessly wide.
Indera, two-time winners of the Brunei Super League, created their best chance of the match when Nkurumeh Kingsley rattled the crossbar with his free-kick.
With Kasuka goalkeeper Hafiz Haji Abdul Rahim being found wanting, Indera’s Zulkhairy Razali could not guide his header towards goal after connecting from a decent cross by team captain Khairil Shahme Suhaimi. 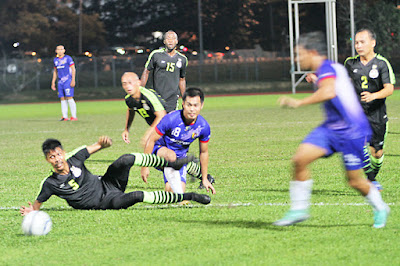 Indera goalkeeper Ahsanuddin came to rescue for his side after making a double save as Kasuka came knocking on the door for an opener that they desperately craved.
Zulkhairy then raced into the by-line before providing a cross into the box but Samson could not navigate his shot towards the goal as the ball ran out of play.
Kasuka’s pressure were finally told as a fine counter attack led to Asri scoring against his former club on the stroke of halftime.
During the restart, Indera instantly replied in the opening minute through Samson but Kasuka seized control the lead just a minute later.
The Indera defence were caught napping as Asri, who enjoyed league triumph with his former club, was afforded time and space to drill home a low finish past Ahsanuddin.
Kasuka tried to conjure another goal through a set-piece as Reduan Petara got to the end of a Maududi Hilmi Kasmi’s free-kick but his header ended comfortably wide.
Kasuka went further ahead as Yapo Adja Kimou Franc Alwin slipped through past the defence before coolly slotting home past the Indera goalkeeper.
Asri had his sights of a hat-trick as he curled his shot after getting the better of his marker but the ball reached safely to the arms of Ahsanuddin.
Kasuka looked to pose serious threat in attack as Alinur Rashimy Haji Jufri volleyed wide a lofted pass by fellow substitute Aman Haji Abdul Rahim.
It got better for Kasuka as Brunei youth international Aisan Aizuddin Aiman got into the act with an audacious lob after spotting the Indera’s goalkeeper off his line.
Indera threatened in the concluding stages of the match but only had a consolation goal from Amin Haji Sisa to show for as they headed to a defeat.
at 12:47:00 AM